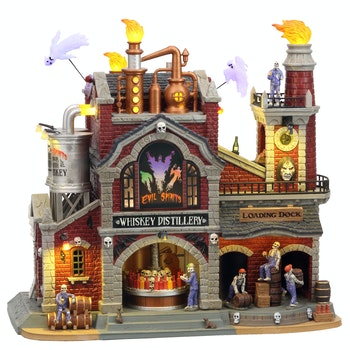 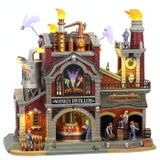 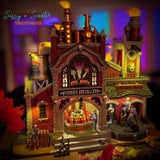 Evil Spirits Whiskey Distillery is the Collector Club You-Name-It-You-Create-It contest winner of 2019. In this whiskey factory, the skeletons are hard at work, carrying casks around the rotating loading dock. Some of the casks have a life of their own as they teeter back and forth. At the base of the distillery, the quality control table rotates as a skeleton worker checks out every bottle. At the top of the tower, the final product moves through a conveyor belt as ghosts dance around the roof.

In 2019 Lemax held a special social media contest called "You Name It. We Create It." where one lucky Lemax enthusiast would win the opportunity to have their idea and concept come to life, and Gretchen Lindlau of Dousman, Illinois was the ultimate winner with her entry Evil Spirits Whiskey Distillery. "The inspiration for this piece came from my two favorite Lemax pieces, Grinning Goblin Brewery and Yulesteiner Brewery. I thought about why I liked the breweries, put those parts together, and then gave it a twist. My Dad collects Irish whiskey, so it was an easy leap from brewery to distillery."

If the Grinning Goblin Brewery and the Yulesteiner Brewery raised their baby in Ireland, the Evil Spirits Whiskey Distillery would be the result. With decrepit brick chimneys on each end, the center of the distillery’s roofline is pierced by an enormous copper still. Illuminated by orange led lights, you can see the base of the still and their skeletal workers through the factory’s front windows. The still’s condenser pipe projects straight up past the roofline. At the apex, the pipe connects to a clear pipe that glows purple and makes an immediate u-turn, heading back through the roof to the receiving vessel that is not visible through the factory’s walls. What little you can see of the condenser pipe, looks like a macabe purple flute, in part due to the multiple access portals that are part of the reflux still design, common among the best distilleries in both the mortal and undead realms. Just like the Grinning Goblin Brewery, the distillery has one clear pipe on the left of the building to store large amounts of liquor and it glows a gentle pulsating light in time. Skeleton workers crawl all over the factory steps, carrying barrels of spirits to the loading dock on the right side of the building. The stockpiled stacks of barrels rotate precariously, just like it’s Yulesteiner parent. The haunted Irish-themed soundtrack marries the burbling and bubbling sounds of liquid with a voice over that repeats the company's tagline "The skeleton crew welcomes you to the Evil Spirits Whiskey Distillery, maker of the afterlife’s finest spectral spirits.".